Assassin’s Creed Odyssey, for the first time in the series, allows us to choose whether we want to take on the role of either a male or female character. These new characters come in the form of two siblings, Alexios and Kassandra. While Alexios and Kassandra are essentially the same character, when it comes to story and dialogue choices, they do offer two different styles of play. Alexios is more of an attack now and ask questions later kind of guy where Kassandra is better suited at a more stealth style approach. 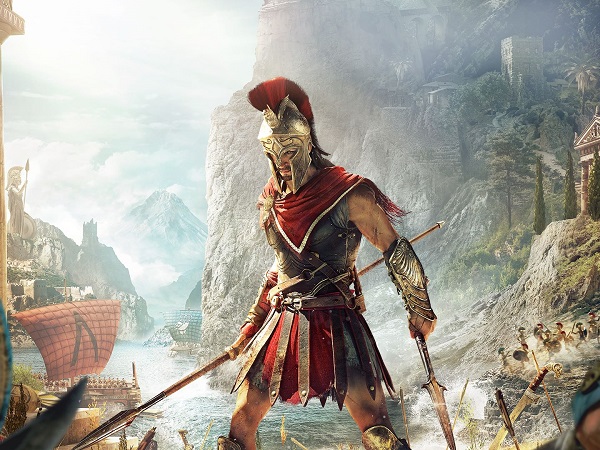 While each character goes through the same motions, I spent my time in Ubisoft’s beautiful recreation of Ancient Greece playing as Alexios. While I do enjoy the stealth style approach, I much preferred playing as a bit of a brute… swinging my sword and daggers around enemy camps, without a care in the world, as I savagely laid waste to those who opposed me. This was fun and really allowed me to customise Alexios to my more aggressive play style. I also ventured through the world as Kassandra for a while. Her approach to situations was more stealth orientated. This was also fun; however, when overwhelmed by enemies, I felt I would need to flee from the area in order for things to calm down as they would take Kassandra down in record time.

To be honest, this kind of choice is fantastic. Each character has their own strengths and weaknesses and this allows the player the option to choose what is best for them… rather than having a single character thrown at them that they are, at the end of the day, forced to play with for the entire campaign.

Assassin’s Creed Odyssey also offers up some great RPG elements that further allow the player to tailor Alexios or Kassandra into the character they want them to be. This time around you can also reset your skill-tree in order to change the way each character plays. This essentially means that you are not stuck with the skills you choose and can pretty much reset things anytime you choose.

Apart from play style, Assassin’s Creed Odyssey also places a lot of emphasis on choice when it comes to the story. Decide to kill a character off early and you may miss out on some quests that come later in the game. Your decisions will also impact the world around you. Choose to spare a family suffering from the plague and risk it spreading… or let soldiers cut them down and have certain citizens judge you for your decision. There are also multiple endings to the game… so be sure to make your choices wisely.

Moving to character selection, while I did enjoy playing as Alexios, I did have a slight issue… unlike Kassandra, I found Alexios to be very inconsistent when it came to voice acting. Kassandra’s voice was more natural while Alexios felt a bit forced. This was not just an issue with the main characters though as the NPCs in the game seemed to suffer from the same issue. Some were voiced to perfection while others sounded unconvincing and slightly cringe-worthy. Assassin’s Creed Odyssey is a massive game; however, a little quality control, when it comes to voice acting, would have gone a long way.

Apart from the hit and miss voice acting, I found Assassin’s Creed Odyssey to be a game I thoroughly enjoyed spending time in. Not only was combat a more fluid as well as a lot of fun, but I also fell in love with the naval battles that have made a return from the rather brilliant Assassin’s Creed Black Flag. Cruising across the beautifully crafted seas was an absolute thrill and the beautiful lighting and weather effects absolutely took my breath away. Even when travelling on land, Assassin’s Creed Odyssey is an absolute masterpiece when it comes to visuals. The rocky hillsides and vibrant Greek cities were an absolute pleasure to explore and scaling large statues of the Gods were equally awe-inspiring.

While the world is beautiful, a game of this magnitude is not without a few issues. I did find that the game did struggle at times to keep up with itself and, quite often, textures seemed to arrive at a location long after I did. This can be forgiven due to the absolute size of this game, but be aware when something goes wrong it can become noticeable. This did not happen too often though.

Conclusion:
Assassin’s Creed Odyssey is an absolutely stunning game. Not only does it offer up a beautiful setting as well as a powerful storyline, but it also allows the player the opportunity to choose how they want to play the game. Multiple endings keep things fresh and having to make decisions that affect the world around you make things more realistic.

Overall, Assassin’s Creed Odyssey is the best game in the series we have seen to date. Whether you are sailing across the open seas or traversing the beautiful lands of Ancient Greece, you will not be disappointed when it comes to what this title has to offer.

I’d also like to take my hat off to the developers who made this game the absolutely phenomenal title that it is.