The 35 must-watch technologies represented on the Gartner Inc. Hype Cycle for Emerging Technologies, 2018 revealed five distinct emerging technology trends that will blur the lines between humans and machines.

Emerging technologies, such as artificial intelligence (AI), play a critical role in enabling companies to be ubiquitous, always available, and connected to business ecosystems to survive in the near future.

“Business and technology leaders will continue to face rapidly accelerating technology innovation that will profoundly impact the way they engage with their workforce, collaborate with their partners, and create products and services for their customers,” said Mike J. Walker, research vice president at Gartner. “CIOs and technology leaders should always be scanning the market along with assessing and piloting emerging technologies to identify new business opportunities with high impact potential and strategic relevance for their business.”

The Hype Cycle for Emerging Technologies is unique among most Gartner Hype Cycles because it garners insights from more than 2,000 technologies into a succinct set of 35 emerging technologies and trends. This Hype Cycle specifically focuses on the set of technologies that is showing promise in delivering a high degree of competitive advantage over the next five to 10 years (see Figure 1). 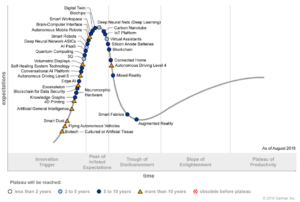 “Technologies representing democratised AI populate three out of five sections on the Hype Cycle, and some of them, such as deep neural nets and virtual assistants, will reach mainstream adoption in the next two to five years,” said Mr Walker. “Other emerging technologies of that category, such as smart robots or AI PaaS, are also moving rapidly through the Hype Cycle approaching the peak and will soon have crossed it.”

Emerging technologies require revolutionising the enabling foundations that provide the volume of data needed, advanced compute power and ubiquity-enabling ecosystems. The shift from compartmentalised technical infrastructure to ecosystem-enabling platforms is laying the foundations for entirely new business models that are forming the bridge between humans and technology.

This trend is enabled by the following technologies: Blockchain, Blockchain for Data Security, Digital Twin, IoT Platform and Knowledge Graphs.

“Digitalised ecosystem technologies are making their way to the Hype Cycle fast,” said Walker. “Blockchain and IoT platforms have crossed the peak by now, and we believe that they will reach maturity in the next five to 10 years, with digital twins and knowledge graphs on their heels.”

Over the next decade, humanity will begin its “transhuman” era: Biology can then be hacked, depending on lifestyle, interests and health needs. Biohacking falls into four categories: technology augmentation, nutrigenomics, experimental biology and grinder biohacking. However, questions remain about how far society is prepared to accept these kinds of applications and what ethical issues they create.
This trend is enabled by the following technologies: Biochips, Biotech — Cultured or Artificial Tissue, Brain-Computer Interface, Augmented Reality, Mixed Reality and Smart Fabrics.

Emerging technologies in do-it-yourself biohacking are moving rapidly through the Hype Cycle. Mixed reality is making its way to the Trough of Disillusionment, and augmented reality almost reached the bottom. Those pioneers will be followed by biochips, which have just reached the peak and will have moved on to the plateau in five to 10 years.

Technology will continue to become more human-centric to the point where it will introduce transparency between people, businesses and things. These technologies extend and enable smarter living, work, and other spaces we encounter.

“Emerging technologies representing transparently immersive experiences are mostly on their way to the peak or — in the case of silicon anode batteries — just crossed it,” said Mr Walker. “The smart workspace has moved along quite a bit and is about to peak in the near future.”

Infrastructure is no longer in the way of obtaining an organisation’s goals. The advent and mass popularity of cloud computing and its many variations have enabled an always-on, available and limitless infrastructure compute environment. This trend is enabled by the following technologies: 5G, Carbon Nanotube, Deep Neural Network ASICs, Neuromorphic Hardware and Quantum Computing.

Technologies supporting ubiquitous infrastructure are on track to reach the peak and move fast along the Hype Cycle. 5G and deep neural network ASICs, in particular, are expected to reach the plateau in the next two to five years.

Additional analysis on emerging technologies will be presented to African CIOs and IT leaders during Gartner Symposium/ITxpo, taking place in Cape Town from 17 to 19 September.