Design
With a sleek design and smaller bezels than previous iterations, the Xperia XZ2 is a clean modern device. With a curved design on the back, the sizable phone fits snuggly into your hand, but putting it down on uneven surfaces did feel somewhat precarious if it wasn’t placed facedown. It’s a solid phone with a noticeable heft compared to some of its competitors. The body is quite slippery and is hard to grip sometimes.

The camera and finger scanner are both located on the back of the phone and very close together, arguably one of the biggest design flaws since you’ll find yourself covering the camera lens instead of the scanner with your finger more often than not. 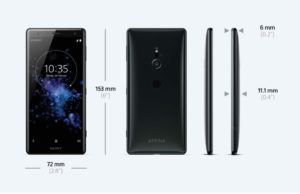 Performance
The Xperia XZ2’s Qualcomm Snapdragon 845 Mobile Platform delivers world-class speed and performance. The phone runs Google’s latest mobile operating system, Android 8 Oreo, ensuring that it’s up to date with the latest tech and performs at its best. The operating system itself is easy enough to get used to if you don’t have any recent experience with other versions of Android. Sony does put their own spin on it, but it doesn’t lose the universal appeal and ease of basic Android. It does come with a selection of preinstalled apps that can’t be deleted, like Sony’s own email, gallery, music and video applications, which is always somewhat frustrating, but even more so in this case when considered that a suite of Google’s apps are also preinstalled.

Battery
The Xperia XZ2 has 3180mAh battery. With regular use, the battery can last up to a full day on a single charge. This is aided by a Smart Stamina feature that slows down the smartphone’s energy consumption. With infrequent use, the battery can last well over two days. The Xperia XZ2 is also capable of wireless charging, however, this feature was not tested during the review.

Camera
The new advanced Motion Eye camera lets you take beautiful, crisp still images or 4K HDR videos. The Xperia XZ2 is capable of taking 4K HDR footage, but this feature arguably won’t be taken full advantage of by the average user, unless most of them happen to be videographers. The Xperia XZ2’s camera also takes full HD 1080p slow-motion video, but this feature only reaches its full potential in natural daylight.

Conclusion
The Sony Xperia XZ2 is a solid, practical smartphone with a great camera and a decent battery life. It doesn’t quite outshine its competitors like the Galaxy S9 and iPhone X, being both bigger and heavier, but it does make up for some of that bulk with processing power and quality video.