Developed and published by Ubisoft, in collaboration with South Park Digital Studios, South Park: The Fractured But Whole has finally launched on the PlayStation 4, Xbox One, and PC. The title is the sequel to the 2014 hit, South Park: The Stick of Truth, and is based on the hit animated show, South Park.

This time around, Cartman and his friends have ditched the medieval fantasy life portrayed in The Stick of Truth and switched it out for a more modern-day superhero setting. This allows Cartman to form an elite group of superheroes dubbed “Coon and Friends.” However, after a falling-out over Cartman’s planned superhero film franchise, the group splinters into two groups, which ultimately creates a civil war between Coon and Friends and The Freedom Pals. While tension brews between the two factions, Cartman calls upon his team to assist him in the rescue of a cat named “Scrambles” in order to claim a $100 reward, which he believes will allow his superhero franchise to become more popular than the Freedom Pals’.

While the storyline may sound simple enough, it spirals out of control – in typical South Park style – and sees the player created New Kid, along with Coon and friends, battle it out against a plethora of absurd characters and circumstances. At one point you are desperately seeking out Scrambles the cat and the next you are battling it out with Professor Chaos’ minions as well as Crab People. The insanity does not stop there as the team will even battle it out against strippers, waitresses, and even 6th graders. There are more adult themed enemies; however, I will leave those for you to find in order to avoid spoilers. 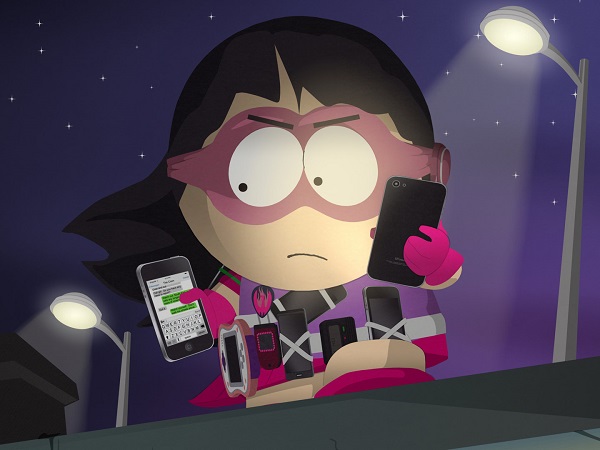 When it comes to storyline, South Park: The Fractured But Whole is a well-deserved sequel to The Stick of Truth. The storyline is solid and filled with a plethora of original jokes and references that stay true to the characters as well as the show. What captured my attention the most during the +- 20-hour storyline was how the line between fantasy and reality was blurred. One moment you are shooting lasers out of your eyes and setting fire to opponents on the battlefield, and the next the kids are moving out of the way of a passing car… it’s hilarious to witness and a great addition to the overall game.

Speaking of combat, South Park: The Fractured But Whole is a Role Playing Game (RPG), which essentially means that combat is played out in a turn-based style on a multi-directional grid. Players can move freely around the grid; however, so can enemies. While combat starts off as simple, in the beginning, things become a bit trickier later in the game when it begins to introduce new mechanics such as summoned in enemies, telegraphed attacks, area of denial, and timed combat that forces the player to respond and move quicker than they usually would. The change in combat mechanics is most definitely welcomed as it really allows South Park: The Fractured But Whole to keep things fresh and diverse.

What also keeps gameplay fresh and diverse in this title is the ability to mix and match superhero archetypes. While you will only be able to choose one, Cartman later allows you to freely mix and match powers from others in order to assist you in creating a powerful and diverse character. There is a lot of depth here, when it comes to combat, by mixing and matching your powers you can knock back opponents into one another as well as freeze or set enemies on fire. You can also double team enemies in order to deliver a staggering amount of damage. To add to it all, you will gain access to over a dozen characters, which will ultimately allow you to assemble the right team for specific fights on the fly.

While South Park: The Fractured But Whole is an excellent RPG, it does, however, have a few issues. The ultimate ability animations are unskippable and become somewhat repetitive. Thankfully, there are plenty of characters to choose from, but if you keep the same team throughout the game things become pretty stale pretty fast. This is the same for the three in-combat mini-games, which also become fairly stale after some time.

Moving away from combat, South Park: The Fractured But Whole is a beautifully designed title, which can almost be mistaken for a 20-hour episode of the actual show. This is due to its perfectly designed and voiced characters. To add to the accolades, the small mountain town of South Park is fully explorable as well as beautifully designed. 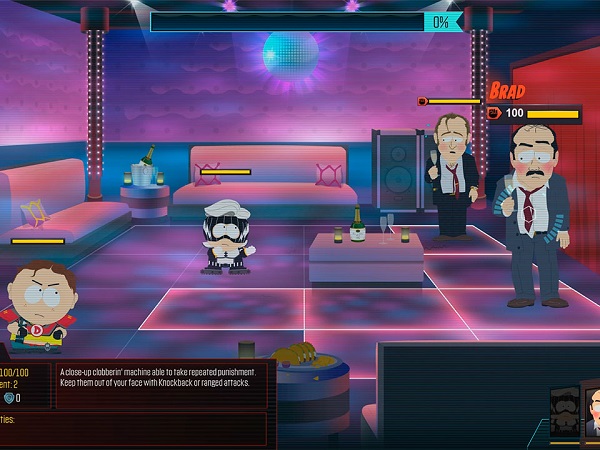 Conclusion:
South Park: The Fractured But Whole is an immense amount of fun to play. It not only stays true to the series, but also delivers a few new jokes that are perfectly suited to the subject matter dealt within this title. To add to the accolades, gameplay is an absolute blast to experience; however, some mechanics do feel repetitive at times. When it comes to visuals and sound, South Park: The Fractured But Whole is a beautifully designed title that is accompanied by top-tier voice acting.