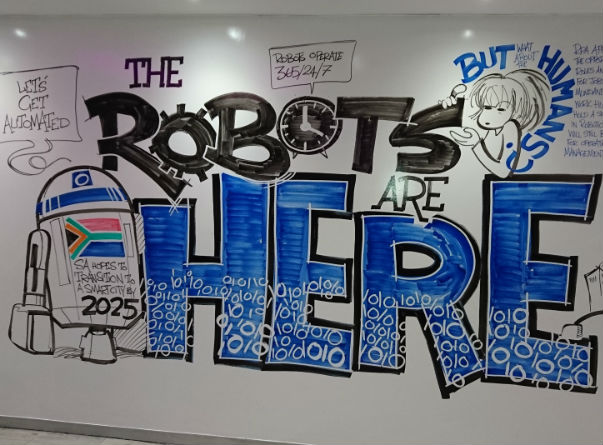 On Wednesday the 22nd March, at a Robotics Event hosted by Deloitte at their offices in Johannesburg, Morne Fischer, an Associate Director of Deloitte who leads the robotics and automation practice for the company, eloquently illustrated exactly what Robotic Process Automation is and highlighted the impact it could have on business.

What is RPA?
There is a common misconception that robotic process automation involves actual walking, talking auto-bots which have an artificial intelligence aspect which will see them taking a seat at our work desks. This is NOT what RPA is, rather it is computer coded system with programmes which replace humans performing repetitive rules based tasks which allows for cross-functional and cross application macros. In other words RPA mimics human actions and is used for rules-based processes, such as invoice processing exceptions. This allows the RPA to address priority business problems driven by process breakages.

What can RPA do?
RPA can effectively and efficiently operate in three important spheres of businesses. The first one is that it can run routine key strokes operations such as opening emails and attachment, copying and pasting data, moving files and folders and filling in forms. In the second aspect RPA can run application interface allowing it to report statistics and log into enterprise applications. Lastly, RPA can collect and manipulate data thus allowing them to perform actions such as extracting structured data from documents, connecting to systems APIs, reading and writing databases, merging data from multiple places, data calculations and scrapping data from the web. These are all rules based repetitive tasks which no longer need to be done by human employees.

Benefits of using RPA
As the old adage goes a robot never gets sick! A functioning RPA operates 24 hours a day 365 days a year providing non-stop performance with no ques at peak. Besides being operational all the time an RPA increases the quality of work by cutting out human errors, it increases speed with a turn-around-decrease of up to 80%. With an RPA conducting all these functions it allows for employees to work more productively as they no longer have to waste time on routine tasks. With a short payback period, roughly 12 months, and the ability to be implemented at scale the benefits of RPA are there for all to see.

Although there are certain challenges involved in the implementation of RPA, such as proving the proof of concept, choosing the right process to automate, monitoring the bot and understanding that RPA offers partial automation not complete automation, the technology and the opportunities that they can provide within a business could change the work place forever.

The Deloitte event impeccably introduced the world of robotics to various industries which will undoubtedly need to take full advantage of the technology if the are to keep up with their competitors moving forward.