Brian Richardson, CEO and Founder of Wizzit International, sat down with IT News Africa for an exclusive interview on the future of banking on the African continent as well as the biggest digital disruptions that could affect banking in 2017. Wizzit International is a provider of mobile banking solutions for financial institutions and service providers and through their services promote financial inclusion. Wizzit’s vision is to financially empower consumers through the creation of a cost effective mobile payment infrastructure.

What inspired you to start Wizzit?

It was really a conversation with Cyril Ramaphosa, who had a torrid day trying to set up a bank account for his son that got me thinking. This led me to go back to my roots in banking and I went to do a little bit of research. I found to my horror that there are 7 billion people on this planet and 3 and half billion of them don’t have access to financial services, In Africa, closer to home, there are 1.2 billion people, 700 million who don’t have access to financial services. It is very difficult for a country to build a thriving growing economy when the bulk of its population is living with money in cookie jars or buried underground.

So we started looking at why people don’t have bank accounts and unsurprisingly our research from around the world came down to 4 common answers .One affordability, banks are expensive. Two, availability, banks operate mainly from 9am-3pm, some with extended operating hours but these are only in major metropolitan areas. Thirdly, where are the banks located, mainly metropolitan areas, what does a farm worker do? They have to walk 30-40 kilometers to get to the nearest bank. The fourth one is the relevance of banking products to the need of the market, their products and services are designed for the upper-middle income markets and the same products are not appropriate for the bottom end of the market, their needs are very different. We saw an opportunity in that the traditional bank models are just too expensive and are aligned to branches, which are incredibly expensive to run. Having an agent in the field with a cell phone costs a lot less. So we were the first to launch this concept of branch-less banking.

In 2017, how do you plan to reach your goals of financial inclusion and economic empowerment?

The technology is changing at the speed of light, today everyone has a smartphone, now that changes the face of banking because you can start to do some very clever things.  The whole technology around remittances is very expensive the average cost of sending money is around 25% of the value, I am not talking about sending gifts I am talking about survival for families in the rural areas, 25% of R100 rand is R25, which is a heck of a load of money. So  we need to look seriously at an alternative mechanism of sending money, particularly cross border. With technology this drives the cost down phenomenally, This could also be done in real time, mobile to mobile almost instantaneously, which could make a big difference to a lot of lives. 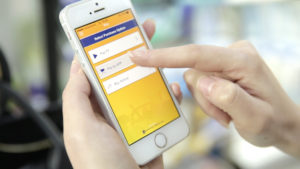 What are the risks attached to cryptocurrencies?

The risk essentially is around the volatility of the currency so lets say I am going to send my aging mother 900 bitcoins and by the time it gets to her it could be 800 or a 1000, if its 1000 no one is going to complain but if it is 800, I have got a bit of a problem. Another question is around regulation, in the world we live in regulation only follows innovation, so in many parts of the world things like bitcoin are not viewed as a currency but as a asset, so then how do you control what regulation sits around an asset. It is still in its fledgling days and a lot has to be worked out still. For me though the huge benefit is that it can be traced there is a full audit trail utilising blockchain which shows exactly who,when where and why it was used so I think the risks are minimised by using this revolutionary  blockchain technology and distribution ledger. At the moment we think it is a very secure means to do remittances.

Will Wizzit look to implement their own form of cryptocurrency?

We are looking at partnering, we don’t believe in reinventing the wheel, so we are looking at various global partners with global reputations and we are in the process of trying to put one particular deal together which could be a huge game changer. I believe it will revolutionise remittances in Africa in particular and in other emerging markets. So we will take it not only to their current customers but to any bank or other financial institutions which will enable them to do real time, low cost remittances.

Is a cheaper POS solution feasible for SME’s ?

If you want to change the payment system you have to change peoples perceptions. Now bear in mind that 99% of retail purchases in Africa are done in cash, and cash is incredibly expensive, dangerous and inconvenient but the benefit is that people have the perception that cash is free, if you use anything other than cash there will be a fee. This is something that the market has to get it’s head around, there is a cost associated with cash, and in a society like South Africa the ultimate cost of cash could be your life. So there is a global move away from cash with companies such as Uber and AirBnB.

The whole interchange model and the cost of the point of sale is very expensive.  If a small retailer is paying 3,4,5% of their turnover away in interchange fees from your traditional card model it is a big disincentive. But Phones this becomes your point of sale device and the technology that Wizzit International uses is very very secure. If I can start to do that and use my mobile phone to pay for a meal at a restaurant, the owner will love it because they will no longer be paying for the interchange and it will also give the customer more points of access.  So I think increasingly retailers will come on board.

What do you make of the shift to inter-operability of mobile payments?

If I take Starbucks as a classic example, they are probably the biggest processor of mobile payments in the world. They work on a closed loop system, I have got an application on my mobile and I can use it to pay for my coffee, I can not use it for anything else. I believe that it needs to be open and inter-operable. I as a consumer, am I going to have 40 applications for different stores each needing some sort of float in it to work? This won’t work for me. What we need is ‘one wallet’, ‘one bank’ account that can be used at any store no matter what bank they are with. It needs to become quick, easy, seamless and affordable.

Is biometrics the future of security?

It is brilliant technology and where it works it works well. It would be incredibly convenient, the issue is how do they capture it, we don’t have a central repository for fingerprints, so it means that for every single retail outlet you will have to go out and register your fingerprints, so until there is a central repository it is going to become quite difficult. To get it going open and inter-operable, I think will take time but I do think it is the future.

A full audio version of the interview is available below:

All the Benefits of Sponsoring Digital Transformation Congress 2020

All the Benefits of Sponsoring Digital Transformation Congress 2020