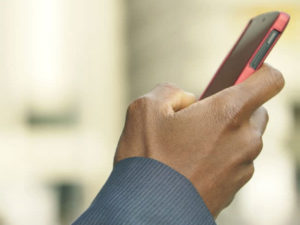 More than 33% of Africans check their phones every 5 minutes and more than half of smartphone users regularly use their devices on public transport, at work and while shopping.

This is opening the door for savvy businesses to provide a “platform for life” that evolves its value through sophisticated data analytics.

The latest edition of the Game of Phones Survey, released by the Technology, Media and Telecommunications (TMT) industry unit at Deloitte and which canvassed over 5,000 respondents across Africa, highlights that more than a billion glances are taking place on smartphones in Africa every day – with over one third checking their phones every five minutes. “This must mean something for businesses as it is clear smartphones are becoming ever more embedded in our lives. Usage indicates a serious shift away from just information and communication to virtually everything – from how we consume media, to banking, purchasing and gaming, for example,” says Mark Casey, Global Media and Entertainment Leader at Deloitte Global.

The research also found that more than half of Africa’s mobile users check their devices within five minutes of waking up and before going to bed. The report indicates that across all markets including South Africa, consumers are most active on their devices when making use of public transport. A smaller proportion of those surveyed reported that they used their mobile device for services such as insurance, healthcare and home security. Increasingly, mobile devices are being used across the region for financial services with the traditional banking models being constantly challenged via mobile technology.

“Such disruptive technology, especially with the traditional services sectors such as banking and finance, has the potential to be a game changer in that it allows for the previously unbanked to now be an active part for the broader economy, thus ensuring a more positive outcome in broadening economic participation among locals,” says Casey.

Arun Babu, Telecommunications Sector Leader at Deloitte, says businesses around the world are already going through a “transformation journey” to improve the way they harness digital disruption, but new trends require ongoing rethinking of business models.

“Users are looking for an increased range of services that are provided reliably and at speed in a brand-neutral continent. It is important that businesses understand the implications of this in order to achieve brand loyalty across a broad range of customers. It is clear consumers are not married to any component as they increasingly seek unified capability,” he says.

While mobile service providers and device manufacturers will need to enhance functionality to remain competitive, future business models in Africa generally need to be positioned for the reality of greater smartphone penetration.

The survey finds that Africa continues to experience huge growth in data usage, with consumers choosing smarter devices as they provide them with multiple functions in one.

While mobile internet remains dominant, Wi-Fi and fibre is growing albeit it is seen as “the dark horse”.

“Faster access speeds, cheaper connectivity and device centric content translates into an explosion of data consumption in both SA and Nigeria. This increase is driven mainly by the growth in Wi-Fi and fibre across the region,” says Babu.

The survey identifies coverage and speed of voice and data network as the most critical factors when choosing a network operator, followed closely by customer service and price and value for money. SA consumers are mostly influenced by price and service reliability which are often key factors when deciding to either change or stay with the service provider while consumers in other markets make decisions based on service reliability and availability.

“As connectivity in the region improves, consumers are given more choice in terms of smartphone networks and operators. This translates into a savvier consumer who is constantly on the lookout for better service and is more aware in terms of pricing of products and value for money service,” says Babu.

Device type ownership also varies fairly significantly across the regions surveyed, with the common theme across markets being multi-device ownership. Aspirational purchases will be a key factor in driving up sales of smartphones with factors such as increased rural urban migration and the emergence of an emerging middle class also contributing to the growth in sales of smart devices.

South Africa remains a multi-device market more consistent with developed markets followed closely by Nigeria. SA remains the strongest in terms of multi device ownership with more than half of users owning a smartphone, laptop and tablet. Feature phones tend to dominate the more rural markets of Kenya and Uganda, however, smartphones are expected to experience substantial growth driven by stronger economic growth, increase in internet penetration and investment in mobile data networks.

These changes mean more and more African consumers are living “in the app”, opening a gap for new business models.

“There is, for example, an opportunity for multinational organisations to build new business models that create value by essentially giving away what they used to sell. This is because the competitive advantage of providing ‘more for less’ is being eroded daily to such an extent that all that remains is a world of ‘free assets’. There is room to take centre stage with a ‘platform for life’ that handles information, education, entertainment, purchases and financial services in one place and which keeps evolving through sophisticated data analytics,” concludes Casey.