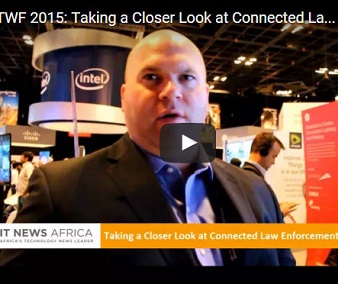 IT News Africa was joined by Harish Punjabi, who is a Network Consulting Engineer at Cisco Systems, and Brian Johnson, who is the Vertical Solutions Portfolio Manager for Cisco’s IoT Services, in order to obtain an in-depth overview of the Smart Police Car and the Smart City Control and Command centre.

The Smart Police Car as well as the Smart City Control and Command centre were on show at the  2015 Cisco: Internet of Things World Forum (IoTWF).

According to Johnson: “South Africa as well as other African countries are not immune to natural disasters and crime. With these Smart City solutions in hand government, police departments, and fire services can allocate the sufficient amount of resources needed in order to combat crime, respond to emergency situations, and ultimately make a city a safer place to live.”

Johnson revealed that the entire system includes features such as real-time video, maps with satellite imagery, Global Positioning System (GPS) tracking, as well as the ability to connect to global database searches using handheld devices that first responders carry with them in the field.

The system also features Biometric Sensors, which monitor a first responders’ heart rate and stress levels. The systems can even reveal if the first responder is in an upright position and healthy… or on the floor and potentially injured.

To gain a full overview, watch the video below: