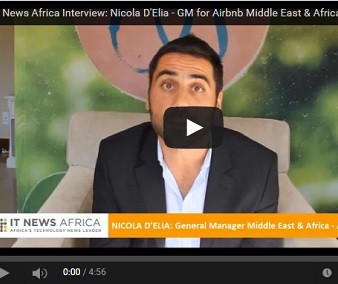 The hotel and accommodation sector in Africa is set to be disrupted by online hospitality company, Airbnb. According to Nicola D’Elia, Middle East and Africa regional GM for Airbnb, South Africa is currently its largest market on the continent.

D’Elia revealed that Airbnb has around 9 400 homes up for rent in South Africa, with Johannesburg featuring over 1 000 listings. Across the continent, there are over 30 000 homes available on the platform.

While Airbnb has had a slightly controversial start, D’Elia stated during our interview that there was no law in South Africa preventing the company from executing its business model in the country.

The controversy began, according to The Guardian, when thousands of San Francisco residents petitioned the city to restrict home sharing websites like Airbnb from operating. More than 15,000 signed a petition calling for more oversight as well as new restrictions on the number of nights hosts may offer.

IT News Africa caught up with D’Elia to gain some insight into Airbnb’s business model.