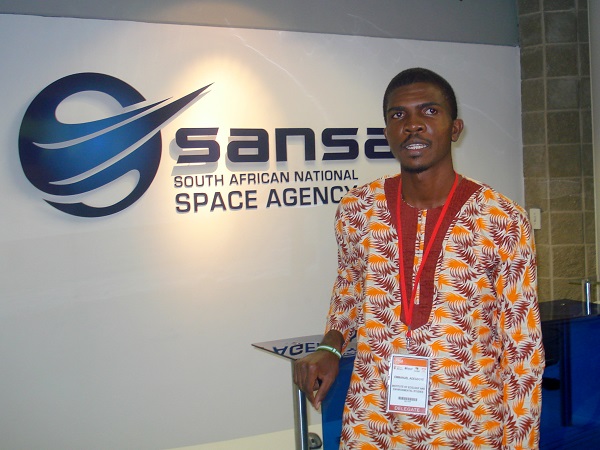 The 2015 MITx Global Entrepreneurship Bootcamp is set to be held between 23 & 28 August 2015. The bootcamp will be held in Cambridge, Massachusetts, USA, and will host 5 startups hailing from Nigeria.

According to MITx, 50 candidates were selected from 24 countries at an acceptance rate of 0.08 per cent. Amongst the 5 is Emmanuel Adegboye’s startup, Bus Stop.

IT News Africa caught up with Adegboye to find out who he is and gain some insight into his startup. In July 2015, IT News Africa also interviewed Chris Kwekowe who is the Co-founder of the Slatecube startup.

1. Tell us a bit about yourself and your background?
I have a background in Engineering Physics. From there I went on to get postgraduate degrees in Remote Sensing/GIS, and later Environmental Control and Management. I also hold a degree in Customer Relationship Management and a Project Management Certification.

My interests however span from computing to management and even to the social sciences. I am especially passionate about technology, how it can be deployed to solve problems on the African continent, and the policies that help create an enabling environment. I play an active role in the African geospatial industry and I currently serve in the capacity of Secretary for the Education, Technology Development and Outreach technical committee of the African Association of Remote Sensing of the Environment. I am also an active member of the Space Generation Advisory Council, the youth forum of the African Leadership Conference on Space Science and Technology, and the ISPRS students’ consortium.

I manage to combine all this with undergoing management training at Venture Garden Group. It is an intensive leadership succession programme intended to groom the next set of leaders for the group’s various entities. Considering the entrepreneurial nature of the organisation, my daily routine cuts across everything from business development and project management to systems development and learning about investor relations.

I am also part of several efforts at promoting entrepreneurship and social innovation in Nigeria including being Project Manager for TEDxIfe (a community of innovators and arguably the best-run independently organised TED event in Nigeria), Events Manager for Lagos Startup Week, Co-Director for the Lagos Chapter of Startup Grind (a community of entrepreneurs actively educating, inspiring, and connecting startup founders to partners) amongst others.

2. Tell us about your startup?
Bus Stop is a transit application for navigating through African cities using public transportation. In Lagos alone, the current population is estimated at 25 million people and a major percentage of these people rely on public transportation for their daily commute. The problem, however, is that the transportation system here is quite chaotic. Things are never the same. Bus times cannot be accurately predicted (There are actually no bus times! You just go to the garage or stand at a bus stop hoping to get a bus), bus routes change, new routes open up, prices fluctuate and all of this makes moving around a challenge. It’s even worse when you’re going to a new part of town.

This can be daunting for both residents and visitors. Every now and then, someone gets to ask around how to get to wherever it is they want to get to. I do it a lot too, but I think things can be better organised. My first time travelling alone in the UK, I wasn’t afraid I would get lost or anything because I had my routes planned out before I even left Nigeria. I was very confident because I knew exactly where I was going, exactly where to get the bus to move me around even from city to city, and exactly how much it was going to cost me. That’s the problem Bus Stop is trying to address. We’re trying to understand the patterns in the seeming chaos and model the transport systems as is so that navigating using the app feels very natural and gives you an exact representation of the reality on ground.

Bus Stop is still in development, but we will launch soon starting with Lagos, Nigeria. There’s, however, already a lot of expectations and I know because we have people signing up daily even though we haven’t launched.

3. Where did the idea for your startup come from?
This idea didn’t come while I was in the shower like a lot of the others I’ve had. It came while I was having a conversation with someone about what solutions I could provide with my skillset. Without much thinking, I just came up with this since it is a problem I already knew existed and that my background uniquely positions me to be able to solve. It just made sense and, even though I have since then tried to shake it off, it just won’t leave me. So, I have no choice but to try to get to the bottom of this.

4. Where do you see your startup in 10 years’ time?
I have very high hopes in Africa and a lot of what motivates me is borne out of my love for this continent. So the answer to this question is tied to where I see Africa in the next 10 years.

I believe we are going to see some rapid infrastructural development in Africa over the next decade. There would be more cities emerging, existing cities would get more organised. I believe, by then, Bus Stop would be used all over the continent. Much more importantly, I see us playing a major role in how the transportation systems evolve across Africa and we would be consulting for governments and developing blueprints that the transport systems in African cities would be based on.

5. How can people benefit from your startup?
By signing up at http://busstop.ng ASAP. You’ll be the first to know when we launch. Feel free to also send an email to info@busstop.ng if you want to reach out to us concerning anything.

6. What do you hope to achieve at MITx Bootcamp?
The exposure at the bootcamp is important for me because of the mentoring I would get for my startup, the experience I would gain by networking with other entrepreneurs from across the globe, and the other benefits of being plugged into the entrepreneurial ecosystem at Massachusetts Institute of Technology.

The training at the bootcamp would also provide valuable insights into how to move my startup to the next stage of growth including how to pitch to potential investors and how to acquire customers. I intend to harness the knowledge and networks I would acquire to further develop Bus Stop into a product that is an integral part of how millions of Africans commute daily.

7. Have you faced any challenges when beginning your startup?
Certainly, like every other entrepreneur does. There have been different challenges at different stages. At some point, it was learning to scale the idea down to what I could easily manage so I don’t get overwhelmed. At other times it was the difficulty of getting team members who believe in your idea and can see the long term potential.

Several other challenges have come, but they have all taught me to be resilient and to keep moving still by harnessing the resources I currently have and focusing on what I can achieve right now with them. It’s like taking one step at a time while not losing sight of the big picture.

8. Have you won any awards for your current startup or previous startup?
Prior to Bus Stop, I developed a Web-Based Geographic Information System for Obafemi Awolowo University in Nigeria. It is the first of its kind for any Nigerian university and for that I was awarded an IEEE-GRSS/AARSE Fellowship to present a paper at the 10th International Conference of the African Association of Remote Sensing of the Environment in Johannesburg, South Africa.