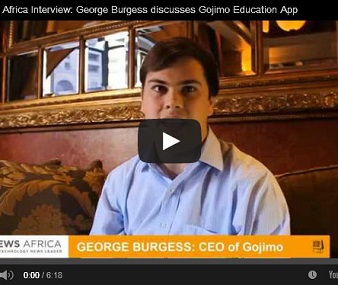 George Burgess, one of the world’s youngest successful entrepreneurs at just 22 years old, has developed an education app that assists students in revising for their school exams. The app which has been dubbed “Gojimo” will be available in South Africa on the 2nd of April 2015.

Burgess, the founder and CEO of Gojimo is one of the UK’s best known young entrepreneurs. At only 15 years of age, Burgess ran his own eBay shop, becoming a super-seller and turning over £36,000 a year. By the age of 17, Burgess had founded EducationApps, a start-up app developer that produces educational content for mobile phones.

Burgess identified South Africa’s demand for technology-based learning and saw the opportunity of launching Gojimo in Africa and putting learning right into the hands of students via their mobile phones.

“Youth today are becoming immeasurably familiar with the world of apps and technology-based learning and are captivated with online presence. Our educational sectors appear to be trying to stay current and up to date with the global technology learning trends but still have a long way to go to reach all of South Africa’s students. By offering a free app that can be put into the hands of every matric student in South Africa, Gojimo is hoping to close the gap in mobile learning,” Burgess added.

Burgess also stated that: “I’ve seen the transformative nature of education and using a mobile learning platform puts that power right into the hands of the students”.

According to Burgess, the app works on both phone and tablet devices, allowing students to download Gojimo for free from either App Store or Google Play. Gojimo now offers free content specifically written for the South African matric’s making it extremely relevant. The app helps students get an instant picture of their knowledge by selecting their exam and the subjects they are studying for. Content can be broken down into topics or students can opt to take a random quiz, they are able to track their progress over time as well as revisit previous questions and answers in order to reinforce their learning.

A crucial benefit for students is that the app works offline so once the content is downloaded students can use the app with no internet connection. Burgess said that with Gojimo he hopes that “together we can help raise pass rates”.

IT News Africa caught up with Burgess for an exclusive interview as well as demo of the Gojimo app. The interview and demo can be found below: