SAP has continued its backing of the Nelson Mandela Foundation, donating R1-million (about US$149 000) in support of the 9th Nelson Mandela Annual Lecture this year, which was held on Saturday, 23 July, at the Linder Auditorium at the Johannesburg College of Education. 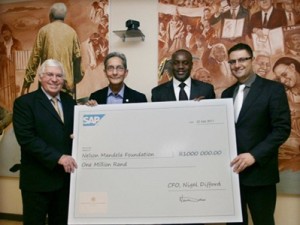 Following in the footsteps of luminaries such as Prof. Wangari Maathai, former Secretary-General of the United Nations Kofi Annan, and retired Archbishop Desmond Tutu, this year’s Lecture was delivered by, Ismail Serageldin, Director of Library of Alexandria (BA) in Egypt, who addressed issues about diversity, cohesion and social justice.

“We are extremely proud of our partnership with the Nelson Mandela Foundation, which we have been involved with for the past eight years. The Foundation embodies the spirit of one of the greatest moral and political leaders of our time and it is both a pleasure and an honour to play an integral part in the ninth Nelson Mandela Annual Lecture and beyond,” says Pfungwa Serima, SAP Africa MD.

The annual lecture forms the basis of the Foundation’s Dialogue and Annual Lecture Programme, which was initiated to highlight the crucial role of dialogue in promoting understanding and generating solutions to the challenges of social development. The event, which coincides with Mr. Mandela’s birthday celebrations, offers leading international figures the opportunity to present their views on major issues in social development.

“This partnership with SAP Africa has been an enduring one. Not only have they funded the Nelson Mandela Annual Lecture since its inception, but they have also become highly active in supporting the programme leading up to the Annual Lecture, through their employee volunteers and overall commitment,” says Achmat Dangor, Nelson Mandela Foundation CEO.