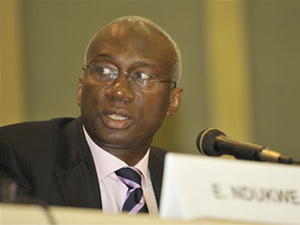 The Nigerian Communications Commission has refuted claims that the call costs in the country are high. In an address to the Economists Conference that ended this week, NCC executive secretary Ernest Ndukwe, said this was only a perception.

“I do not agree that the cost of calls in Nigeria is too high. Subscribers in Nigeria are paying market rates comparable elsewhere in Africa.

“It is only a perception. Nigeria is a highly competitive market and prices would go down with time. Some time back, a fixed line was sold for N250.000, but the same line is almost free now”, he told delegates at the conference.

Meanwhile, Ndukwe stressed that Nigerians should register their SIM cards saying that the move was not only necessitated by security reasons in the highly fraudulent country.

He said the NCC has engaged a consultant to drive mobile number portability which will be introduced soon. This follows in the footsteps of South Africa, which introduced the initiative in 2007.