According to the report, non-resource intensive countries are expected to expand at a solid pace, helped by robust investment growth. South Africa, Nigeria and Angola, the region’s largest growing economies will be slightly weaker than expected, as the region is still experiencing negative per capita income growth, weak investment, and a decline in productivity growth, but the rest of Africa will be more favourable.

A significant number of 2018’s top performers are non-commodity intensive economies. The list is led by Ghana, followed by Ethiopia and Côte d’Ivoire, with Senegal and Tanzania occupying the fifth and sixth spots respectively. Africa has six of the world’s ten fastest growing economies this year, according to the World Bank.

The latest forecast places East African country, Ethiopia at 8.2 percent with the West African nation, Ghana leading the continent at 8.3 percent.
The low post-crisis increase in total-factor productivity (TFP) growth in Sub-Saharan Africa has been attributed to a slowdown in convergence to the technological frontier after a rapid catch-up in the decade preceding the crisis according to the World Bank.

IT News Africa has compiled a list of the top 10 African economies investors can watch in 2018 as forecasted by the World Bank.

10. Niger
Niger’s economic growth, estimated at 5.2 percent in 2017, was driven largely by the secondary sector, particularly oil. In 2018, growth is projected to be 5.2 percent. The Gross Domestic Product (GDP) in Niger expanded 5 percent in the fourth quarter of 2017. The economy of Niger, a landlocked sub-Saharan nation, is upheld by uranium exports and foreign financial assistance.

9. Rwanda
Small and landlocked, Rwanda has a population of about 11.9 million people (2016). Rwanda’s economic growth is predicted to be 5.9 percent in 2018. Between 2001 and 2015, real GDP growth averaged at about 8 percent per annum. The second Economic Development and Poverty Reduction Strategy (EDPRS 2) outlines the country’s overarching goal of growth acceleration and poverty reduction through four thematic areas: economic transformation, rural development, productivity and youth employment, and accountable governance.

8. Benin
This year, Benin’s economy showed promise. This can be attributed to the ‘Revealing Benin’ programme which acts simultaneously in institutional, economic and social areas. Among other things, it comprises of 45 flagship projects in the economy’s key sectors. The project is estimated to cost a total of $16 billion and aims to be completed by 2021. Benin’s economy relies heavily on its agriculture and its informal re-export and transit trade to Nigeria, which makes up roughly 20 percent of GDP. The economy in the country is projected to see a 6 percent growth in 2018.

7. Burkina Faso
Burkina Faso is a low-income, landlocked Sub-Saharan country with limited natural resources. The opening of new industrial mines, coupled with a slight rebound in gold and cotton prices and rising grain production, paved the way for an acceleration of economic growth in 2016. According to the World Bank, Burkina Faso continued to improve its external position in 2016, with a current account [deficit] of 6.8 percent of GDP, compared to 8 percent in 2015. The country’s economic growth is projected to be 6 percent in 2018.

5. Tanzania
In the last decade, Tanzania has seen a relatively high economic growth, averaging 6–7 percent. With an overall population of about 55 million in 2016, the East African country has seen a decline in poverty. Although the real gross domestic product (GDP) growth rate slowed in 2017, in 2018 economic growth is expected to hover around 6.8 percent. Private sector involvement in the country’s development can help finance the government’s ambitious investment plans, be a source of finance and innovation, and create jobs for new entrants into the job market.

4. Senegal
In 2016, Senegal was termed by the World Bank as the second fastest growing economy in Africa, further validated with this past year’s economic growth. In its third quarter in 2017, Senegal’s economy grew at a rate of 7.1 percent, its strongest since the last quarter of 2015, when it was at an all-time high. Analysts expect overall growth to be as high as 6.8 percent in 2017 and the World Bank has predicted a growth of 6.9 percent for 2018.

2. Ethiopia
Ethiopia’s economy is growing at 10 percent a year and is expected to double within the next seven years. According to the World Bank, this means that by 2025, it will have grown to a middle-income nation. Ethiopia’s economy is concentrated in the services and agriculture sectors. The last 10 years has seen Ethiopia average around 10 percent economic growth. The East African country has the second highest growing economy and predicted to grow by 8.2 percent this year. Ethiopia’s economy is boosted by a number of large-scale infrastructure projects, including the Grand Renaissance Dam and a railway network. 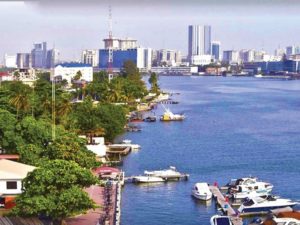 1. Ghana
Ghana saw an improved performance in 2017 after a difficult 2016. The West African country is projected to see an 8.3 percent growth in 2018. According to the 3rd edition of the Ghana Economic Update, the service sector bounced back, and the fiscal consolidation is paying off. The inflation rate is also down to just 10 percent. In January, Ghana’s benchmark stock index achieved the world’s highest rate of growth at 19 percent.