On Tuesday 18 October 2017, Dell unveiled the Dell Learning Lab in the South African informal settlement of Diepsloot. The lab, which is the second of its kind in the area, is located at Diepsloot Secondary School and comes in the form of a big mettle container and despite the attractive colour scheme, it is not what is outside that matters but rather whats inside. Together with non-profit organisations, Code 4 Change and Computer Aid, Dell has kitted the container out with rows of computers which will serve 842 pupils at the school.

According to the company, The Dell Learning lab is an ambitious project which aims to bring digital technology wherever it is needed. Dell looked to use the latest in technology efficiencies to power this Learning Lab which is home to a dozen computer workstations: networked to each other and to the Internet, and self-sustained through solar power.

“I absolutely love this solution,” said Natasha Reuben, Head of Transformation at Dell EMC South Africa. “It’s a fantastic way to not put pressure on a school or rural community in terms of electricity, as this solution is off the grid. More importantly, this little container has the potential to do so much. Kids can go in during the day and learn. They can code and play with new technology. In the evening the community has access to it. They can use it to find jobs and research.”

One example Reuben loves is that of an old grandmother who joined her son at one of the Labs while he updated his CV. She tagged along not so much for the company, but to find new recipes online. The depth of the kind of access to the internet and help that it brings is what the Learning Labs are setting out to achieve. 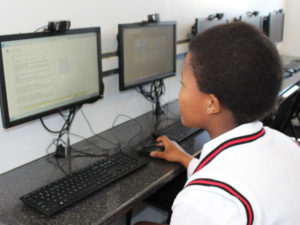 Making Technology Matter
“Technology is forever changing and I think it is important to learn about technology like this,” said Ntale Mametse, a pupil at one of the labs. “It gets you to think about other careers that you didn’t know about before.”

Since launching in 2014, sixteen labs have been launched – some in Kenya and Nigeria, but the majority live across South Africa. Each is carefully chosen: Dell works with partners such as Change The World and Sci-Bono to find communities who want such facilities. It may seem like a given that anyone would approve of a lab, but there is considerably more nuance to such a project. Indeed, this is why many corporate social investment programmes fail: they take a parachute approach, the embodiment of ‘build it and they will come.’

In reality, if there is no sense of ownership from the community, the project inevitably fails. Instead of relying on the flawed determinism that technology will inevitably deliver good, asking what the community needs is crucial. Local organisations, churches and other groups are approached. But the foundation of this is the school where the Lab will be located. If the staff are not co-opted and given the lead on a Lab, it risks becoming a white elephant.

“I love the knowledge that we are gaining here, because it helps me integrate my lessons,” said Mike Masinge, a 19-year veteran teacher from Olifantsfontein. “It helps me teach to the best of my abilities.”

Each Lab is equipped to meet the varied demands and desires of a rising community. A curriculum is designed to help the studies of the pupils, and staff are assessed and trained to take advantage of the Lab’s services. But this goes further: Dell and its partners continuously evaluate the Labs and adjust them. At a high level every lab is scrutinised at least once a quarter, but on the ground it is a weekly and even daily activity.

The Labs are also always connected, enabling Dell administrators to know if there are technical problems. The computer equipment is continually monitored to ensure they are still working, a concept in business technology called ‘managed services.’ 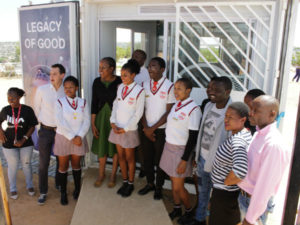 Community-Driven Success
But the fundamental success of the project is rooted in community support. It must be seen as having real value, which is why every Lab are available to the larger town beyond the school. Each container is also a wireless hotspot and locals are frequently engaged to see what they need from the container and if they grasp some of its potential. It’s forged a high degree of ownership with each Lab, down to community members guarding their local containers.

“Most of our learners, if you ask them what is it that they get from the lab, they say they are getting more information, accessing books they don’t have,” said Sihlomo Puzam, one of the parents whose children frequent their local Lab. “It has changed my child’s life so much.”

Technology does not change the world. That is a myth, often told by those who live in the middle of a technology storm. But for those waiting at the edges for that rain to reach them, technology’s true purpose is clear: it’s a means to an end, to create a better life. Empowering people through technology, on their terms, is the key to success.

The Dell Learning Labs are proof of this. By putting the community first and providing technology that makes sense, not just tick a few altruistic boxes, is how real change happens. As new Labs arrive across the country, we all take a step closer towards a united and prosperous future.