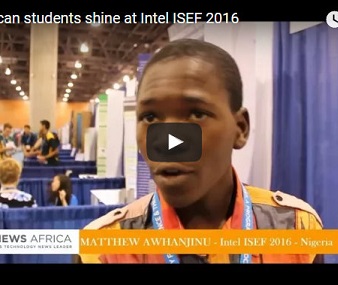 The Intel International Science and Engineering Fair (Intel ISEF 2016), which was held in the United States in Phoenix Arizona, saw approximately 1,700 high school students from over 75 countries in attendance. Among these individuals were students from Nigeria, South Africa, Egypt, Tunisia, and Kenya.

Highlighting the event this year was Brynn Cauldwell who represented St Stithians Boys College, which is located in Johannesburg, South Africa. At a special awards ceremony, held by Intel, Cauldwell won the United Technologies Corporation Award – which came with $3,000 USD in shares of UTC common stock.

Included in the list of winners was Mansi Apte and Vishal Vekaria from Shree Cutchi Leva Patel Samaj School, which is located in Nairobi, Kenya. The team was hailed for their innovation in water purification, which essentially provided Kenyans with clean drinking water within arid and semi-arid parts of the country.

Cauldwell, along with fellow African students, was interviewed by IT News Africa at this year’s fair. Among the interviewees, in the video below, are students representing South Africa, Kenya, and Nigeria.

Watch the video below to find out more about Africa’s inspiring youth and future innovators.

A full listing of finalists is available in the event program. The Intel International Science and Engineering Fair 2016 was funded jointly by Intel and the Intel Foundation with additional awards and support from dozens of other corporate, academic, governmental and science-focused organizations. This year, approximately US$4 million was awarded.