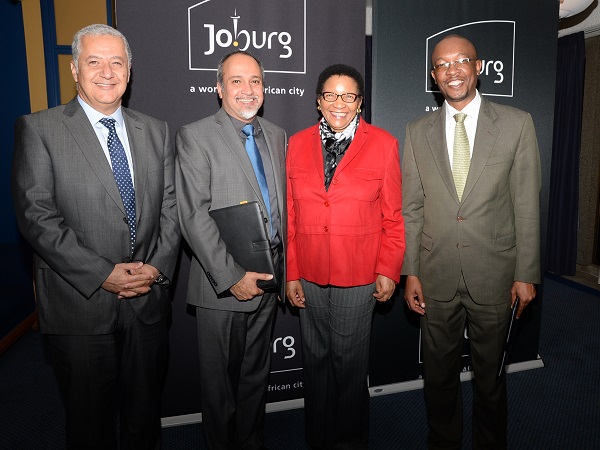 The City of Johannesburg’s transformation drive into a Smart City received a boost on Tuesday, June 23, 2015, when the metropolitan signed a collaboration deal with Microsoft South Africa.

The Memorandum of Understanding (MOU) agreement between the two organisations was signed by Johannesburg Executive Mayor, Councillor Parks Tau, and Microsoft Corporate Vice President, Mr Ali Faramawy, at the Metropolitan Centre in Braamfontein.

This comes just over a month after Mayor Tau unveiled the transformation plan of the municipality into a Smart City that thrives on easily accessible state of the art citizen interaction platforms such as free Wi-Fi hotspots and applications that boost service delivery.

The new public-private agreement will see Johannesburg and Microsoft  explore ways of partnering on a variety of programmes and initiatives to achieve their mutual goals of skills development, job creation, promotion of SMME’s – as well as to attract foreign direct investment into the City.

Speaking shortly after the signing, Mayor Tau said: “The agreement paved the way for joint efforts in the promotion of innovation and an easily accessible IT economy within the City. This will help us bridge the current digital divide faster.”

“Microsoft has already demonstrated its great appetite to bring value into the public sector through its push to take the lead in cloud-based approaches for particularly smaller businesses,” he said.

“This speaks to several of the City’s developmental and job creation programmes such as Jozi@Work, Vulindlel’eJozi – and the much anticipated Jozi Digital Ambassadors programme. The fact that Microsoft ‘s developmental objectives match those of ours as a City gives us confidence that a lot is to come from our partnership for the overall benefit of the people of Johannesburg,” said Mayor Tau.

Mr Faramawy said the partnership with Johannesburg is part of the global software giant’s programmatic value and contribution to areas of public interest.

“Microsoft continues offering value to small and emerging businesses, particularly in the digital entrepreneurial space. This includes a number of programmes that provide support ranging from free or very low cost software – to online business support tools to physical locations where entrepreneurs can operate,” he said.

Both Johannesburg and Microsoft have recently been involved in running hackathons and other developmental competitions for both applications and games in a bid to seek out new technology and talent.

“Through the new partnership with Johannesburg, Microsoft is very keen to calibrate this process for bottom of the pyramid impact,” Mr Faramawy said.