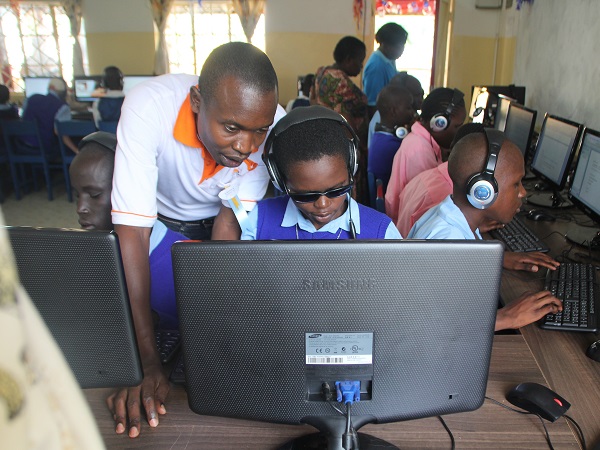 A total of 356 blind and visually impaired students at St. Oda Primary and secondary School for the Blind – Gem District, Siaya County will benefit from assistive learning technologies through an initiative dubbed “Computer Labs for the Blind” courtesy of a partnership between InAble, AccessKenya, and the Rockefeller Foundation.

The program seeks to train blind and visually impaired students as well as their teachers in basic computer skills such as accessing the Internet and online education content. According to companies involved, this will help students develop skills that will make them employable.

Irene Mbari Kirika, Executive Director, InAble Kenya stated that: “The scarcity of facilities and human capital for the blind and visually impaired have for a long time meant that they cannot compete equally with their sighted peers. They either find it difficult to start an education or complete the same under challenging conditions that make it impossible to build a foundation for self-reliance and contribution to the community, pushing them into begging and other forms of activities for their survival.”

“Braille textbooks happen to be bulky and expensive, requiring up to four or more students to share a single book, presenting a challenge in imparting knowledge to the students. For instance, whereas the cost of books required by a Form 4 student costs about KES 7,060 it would cost slightly over KES 61,000 in braille which is way out of reach for very many Kenyans,” added Irene.

“Other materials like the braille notepaper, a critical tool in the learning processes for the blind and visually impaired students. Unfortunately, as with the textbooks, braille notepaper is significantly more expensive than the standard note paper used by sighted students and as a result, blind and visually impaired students are often unable to take notes in class, yet they are expected to sit for the same tests and exams,” concluded Irene.

AccessKenya Group will be investing Kes 7.2 million over the next two years in the provision of technology resources and financial support to aid in the growth and adoption of ICT. From the fund, Kes 6 million will go towards the ‘Assistive Technology Labs” project by InAble Kenya with the provision of broadband internet and related technology support to bring online six public primary and secondary schools that cater to the blind and visually impaired in the next 12 months.

“Looking at most ICT initiatives around us, we realised that there was a lot of focus on the provision of hardware but little emphasis on skilling both for the teachers and students. We are therefore making it easier to access the curriculum and other resources such as digital books and applications all which available online in order to deliver value in technology studies.” Added Emily Kinuthia- Marketing Manager, AccessKenya.

High School students that graduate with braille skills are still at a severe disadvantage as they enter a world that is completely oblivious to braille. Reliance on braille thus significantly limits continuing educational and employment opportunities, and as a result the blind and visually impaired are often either hidden from society, or are forced into begging and prostitution for survival.

The Rockefeller also donated $140,000 for the program that is aimed at enabling students and their teachers’ access creative teaching and learning.