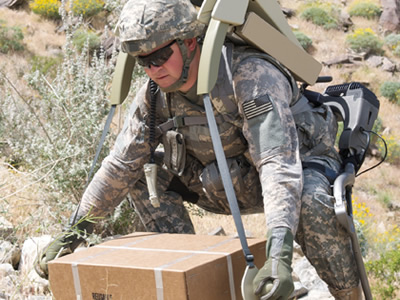 Lockheed Martin announced recently that it has received a $1.1-million contract from the US Army for human trials and evaluation of its advanced ruggedized Human Universal Load Carrier (HULC) exoskeleton, “designed to augment soldiers’ strength and endurance, as well as reduce load carriage injuries.”

According to Lockheed martin: The HULC is a completely un-tethered, hydraulic-powered anthropomorphic exoskeleton that provides users with the ability to carry loads of up to 200 lbs for extended periods of time and over all terrains. Its flexible design allows for deep squats, crawls and upper-body lifting. There is no joystick or other control mechanism. The exoskeleton senses what users want to do and where they want to go. It augments their ability, strength and endurance. An onboard micro-computer ensures the exoskeleton moves in concert with the individual. Its modularity allows for major components to be swapped out in the field. Additionally, its unique power-saving design allows the user to operate on battery power for extended missions. The HULC’s load-carrying ability works even when power is not available.

Larry Fisher, research director from ABI research says, “We anticipate that completion of the Army’s field tests and trials, probably in 2014 or 2015, will be followed by widespread commercial production of powered exoskeletons. Deployment of exoskeletons in commercial sectors will probably remain quite limited for another decade or so, due to their high cost (more than $25,000 per suit).”

Further, Fisher observes, “We project the overall market for exoskeletons, powered prostheses and optical sensory devices to exceed $877 million in 2020. Exoskeletons will make up roughly a third of the market by 2020 on a revenue basis, accounting for sales of $292 million, and slightly more than a third on a unit basis, with more than 11,000 to be delivered between now and 2020.”